In 1992, my parents moved to their permanent home in Marikina City. Since getting married, they had been living in rented homes, and now they we finally able to buy their own place. They we able to pool their funds, and buy a newly built house whose real estate value dropped after the Great Luzon Earthquake of 1991.

During that time, Marikina was more known for its terribly damaged roads and other undeveloped areas, which would be a favorite dumping ground for murdered rape victims from the neighboring cities. So we were not so thrilled about being considered a Mariqueño, but we all needed a new home with the rising rent fees in Quezon City.

But as time passed by, I was slowing interacting with the different communities, I discovered the rich heritage and culture of Marikina, and soon began to see myself fitting into the vibrant life of a Mariqueño.

I will admit, the great influence in my change of perception of the city was due to the tireless efforts of its former mayor, Bayani Fernando. Mayor Fernando was elected in 1992, and in the 9 years as mayor he vigorously worked to uplift the lives of the Mariqueños, until the city became the envy of the other cities of Metro Manila. In that short span of time, he repaired all the damaged roads of the city and expanded more infrastructures to speed up trade. He also cleaned up the traffic congestion, reorganized government operations to end the bureaucratic red tape in the local government agencies, and dropped the crime rate to a significant low.

One of his greatest achievements was to subtly strengthen the cultural programs of the city, and embrace all the artists and craftsmen living in Marikina. He did this by getting his elder sister, Ligaya Amilbangsa, to develop the Sentrong Pangkultura ng Marikina (Marikina Cultural Center). Mrs. Amilbangsa is a noted dancer, who promotes the ancient art form of the Tausug people called the Pangalay, which she learned when she lived in the islands of Tawi-tawi and Sulu when she married Datu Punjungan Amilbangsa, a son of the Sultan of Sulu.

In 1993, Ligaya Amilbangsa called upon all the artists living in Marikina, and we put our efforts in helping in the art and culture programs of Marikina. In 1999, I was able to conduct a solo exhibition at the Sentrong Pangkultura ng Marikina.

The area of Marikina was long settled before the arrival of the Spanish colonizers in 1570, and the town of “Mariquina” was established and name after the Spanish governor general Felix Berenguer de Marquina, in 1687. Situated between the plateau of Quezon City and the Southern Sierra Madres, the whole city is in a valley that is cut by the Marikina River.

Marikina is best known as the “Shoe Capital of the Philippines”, where as it was producing 70% of the locally made shoe up to the 2000s. The local shoe industry started in the 1900s with Don Laureano “Kapitan Moy” Guevara, who just originally wanted to fix on his own the broken shoes he purchased abroad. As he took apart the shoe, and studied how it was made, he began working with local tanners, blacksmiths (panday) and wooden clog (bakya) makers to make his own shoes. Soon he was hiring and teaching local residents his techniques, and by 1887 Marikina was a shoe making town. The residence of Don Laureano “Kapitan Moy” Guevara is now part of the cultural heritage of Marikina City, and it is also the home of the Sentrong Pangkultura ng Marikina (Cultural Center of Marikina). 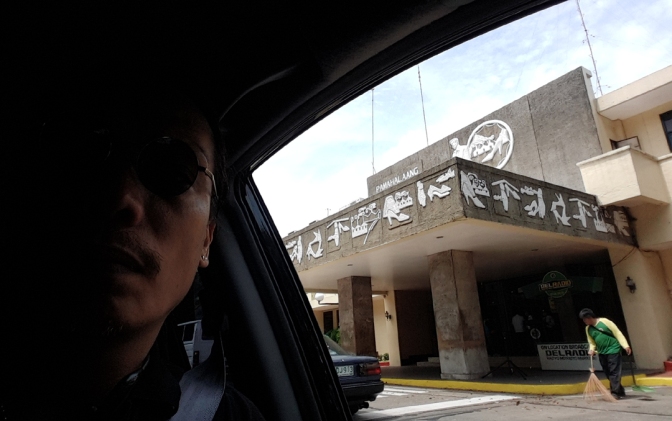 All around the city, there are images and artworks that celebrate the Shoe Industry of the city. At the old Marikina City Hall was completed in 1969 with a relief of the shoe industry on its façade. This artwork is the work of Eugenio Bunuan, who is noted for his adobe reliefs work at the Quezon City Hall and the Marikina Sports Park.

The last time I visited the Marikina City Hall, there was a Sapatos Festival (Shoe Festival), where the latest design by local companies were on display, along with the History of Shoes shown in reproductions by local craftsmen, and the gigantic shoes made by local designer/entrepreneurial activist Brian Tenorio.

Outside the City Hall, the Shoe Car was on display as part of the Shoe Festival.

Mr. Tenorio has been trying to revitalize the local shoe industry, which has suffered greatly against the influx of cheap shoes from China, and he is also trying to promote local coffee brews.

At the Marikina Riverbanks Commercial Center, there is the Shoe Gallery which a daily showcase and sale of the latest designs of different shoe companies in the city. Part of that display is the Guinness World Records’ largest shoe, which measures 5.29 metres (17.4 ft) long and 2.37 metres (7 ft 9 in) wide. 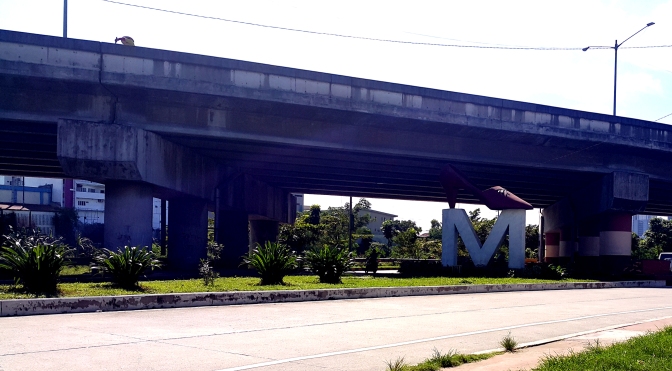 Around the city, there are many sculptures of a pair of red high heel shoes, such as the one at the entryways from Quezon City to Marikina.

Near the Kapitan Moy Residence, there is Marikina Shoe Park, which is a garden with 2 large shoe sculptures where people can relax and maybe picnic.

And beside the Shoe Park is the Marikina Shoe Museum, which stands as a testament of Philippine History and shoes (I will expound on the Shoe Museum in another blog post).

19 thoughts on “Marikina City: The Valley of Shoes”