Hidden among the trees along the west side of Commonwealth Avenue is the U.P. Asian Institute of Tourism (AIT). Established in 1976, the AIT is part of the University of the Philippines(U.P.) system, and serves as the university’s school of tourism management.

The AIT was founded as a collaboration between the U.P, the Department of Tourism (DOT), and the Philippine Tourism Authority (PTA). In the 1978, the AIT Complex was completed, with the AIT Hotel as its on-the-job training facility for its students. By the 1980s, the AIT Hotel became the choice venue for events hosted by organizations in the university. But lately, the whole complex has fallen to disrepair and neglect. Presently the AIT is under renovation, with the Microtel Group of Hotels leading the joint project to revitalize the AIT.

At the driveway rotunda of the AIT, there are four Muses sculpted in the classical style. Each muse bears a different gift to the visitors: the Flowers that welcome the visitors, the Flame that lights the path, the Stalks of Wheat that will feed the guests with bread, and the Grapes that will be turned into wine. These Muses of Hospitality were created by the National Artist for Sculpture, Napoleon Abueva.

Napoleon Abueva – The Four Muses, The Bearer of the Flower Wreath 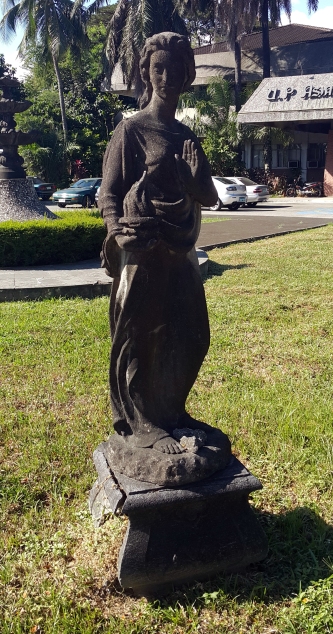 Napoleon Abueva – The Four Muses, The Bearer of the Flame

Napoleón Isabelo “Billy” Veloso Abueva (1930-2018) studied at the U.P. School of Fine Arts, under National Artist, Guillermo Estrella Tolentino (1890-1976), who was then the director of the school. Although trained in the classical style of sculpting, Abueva broke from its mold and began experimenting on modernist styles and techniques. Soon he became known as and Godfather of Philippine Modern Sculpture. Aside from the many historical monuments that are found all over the Philippines, Abueva has also been commissioned to create sculptures around the world. In his youth, he was awarded the Ten Outstanding Young Men of the Philippines (TOYM) award; which would herald more awards and distinctions in his life. He was proclaimed National Artist for Sculpture in 1976, making him the youngest recipient of this distinction. And just like his mentor, Abueva also served as dean of the U.P. College of Fine Arts.

Napoleon Abueva – The Four Muses, The Bearer of the Wheat Stalks

Napoleon Abueva – The Four Muses, The Bearer of the Wine Grapes

Hopefully with the renovations of the AIT, there will be a renewed spirit of hospitality and celebration in these halls, and these hidden works of the master sculptor will be once again appreciated by visitors for all over the world. 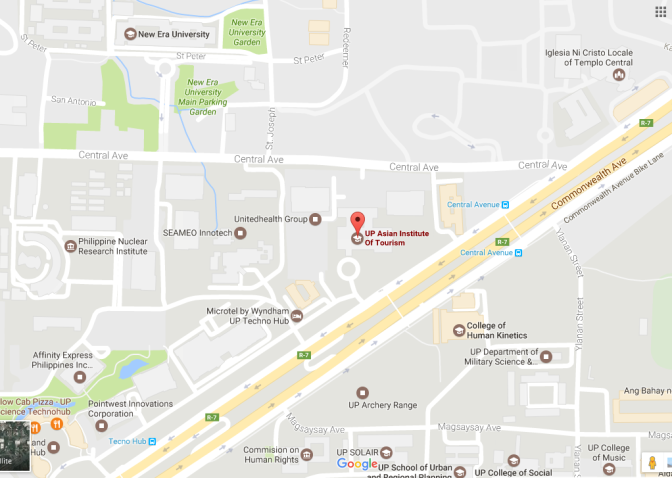 One thought on “University of the Philippines, Quezon City: Asian Institute of Tourism”