Hidden between middle-class subdivisions and squatter shanties of the Old Balara District, at the western side of Commonwealth Avenue, is the Erehwon Center of the Arts. It is curious to find such a fledging art hub is situated in the middle of “nowhere”, which can stand as the ananym of name Erehwon. Some may surmise that the art center may be a mythical land (and why not?), such as the “Erehwon”, written by Samuel Butler (1835-1902), in 1872. However, the name “Erehwon” was coined as an ananym for “Here Now!”, which meant that this is the place and time where new ideas and activities will shape and arise.

Founded in 2012 by businessman and art collector Rafael Rivera Benitez (born 1953), the Erehwon Art Center was first a family owned plant for baked goods, until it shut down due to a workers’ strike in the late 2000s. Searching for a new use for the large compound, artist friends convinced Mr. Benitez to put up an artist’s center, while banking on the future commercial and infrastructure developments along  Commonwealth Avenue will boost the commercial sustainability of the center. So in October 2012, the Erehwon Art Center was officially launched.

Boasting several galleries for exhibitions, the Erehwon Art Center was not content with exhibitions, but aimed to thrust a renewed public consciousness of contemporary art, by working with government and private institutions to create new forms of Public Art. Soon artists aligned with Erehwon were creating murals and outdoor sculptures for the Quezon City Hall (2014), the Philippine National Bank (PNB) Headquarters (2016), and their latest project will be part of the Philippine Congressional Library and Museum, located at the Batasan Pambansa Complex, in Quezon City. Most of the murals executed by Erehwon artist were typical of the multi-imaged symbolic paintings, which were popularized by the National Artist, Carlos “Botong” Villaluz Francisco (1914-1969), in the 1950s-1960s. However in 2015, the Erehwon artists courted controversy, when they painted the life sized full-bodied portraits of the 44 Special Action Force (SAF) members of the Philippine National Police (PNP), who were massacred in a botched operation in Mamasapano, Mindanao, on January 2015. Created a few months after the incident, the mural is entitled “Tagaligtas 44”, and it was supposed to be housed at the PNP Academy, in Cavite; but the project was scrapped when some people grew frightened that (then) President Benigno “Noynoy” C. Aquino would be vexed, since he was implicated in the poor planning of the botched operation. The painting was executed by Grandier Bella, Camille Dela Rosa, Jerico De Leon, Leonilo Doloricon, Lourdes Inosanto, Jonathan Joven, Othaniel Neri, Emmanuel Nim, Dario Noche, and Eghai Roxas.

The next trust of Erehwon was to house other art disciplines, and create an interaction of these different creative forces in one roof. The first action was to construct a music hall, on the third floor of the building, in 2013. This space would be the practice and performance hall for the Metro Manila Concert Orchestra (MMCO founded in 1999), which is lead by Alfonso “Coke” Bolipata as Artistic Director and  Josefino “Chino” Toledo as Musical Director. By 2016, the world music ensemble, Talahib People’s Music (established in 2000), and the theater group, Sipat Lawin Ensemble (established in 2009), also found a home in the Erehwon music hall.

From the music of the MMCO, the Erehown now had to invest on other performing arts, and in 2015 a dance studio was opened, and it became the home for the experimental dance troupe of Daloy (established in 2014), lead by its artistic director, Ea Torrado. Although the Daloy group has moved on to another home, the Erehwon dance studio has always been open to all dance companies and creative groups. And in 2016, the Filmdogs Collective joined the stable of Erehwon artists.

From public art to the intermingling of art disciplines, Erehwon now had to expand its influence to a larger public. So in 2015, the Erehwon Art Tours was launched, with initial trips to historical and artistic locales such as the walled city of Intramuros, the National Museum Complex, the Pinto Art Museum Complex, among some of the notable sites.

Another venture of the Erehwon Center of the Arts is its Publications Unit, which has produced many books and journals. Behind the printing plant, there is a place for artists and employees of Erehwon to hang out, eat or just have a cup of coffee: the Erehwon Café. Opened in 2014, the café is the informal meeting place of all members and visitors, while looking at the Erehwon collection, as well as the large glass prints of notable artists of all disciplines.

Looking far into the future, the next major project of the Erehwon Center of the Arts is the establishment of the American Museum of Philippine Art, in Chicago. A joint project with the Field Museum of Natural History and the John D. and Catherine T. MacArthur Foundation, this is a very grandiose plan to expand Erehwon influence to communities not just at home, but abroad. One of the first projects of this partnership was the 2015 Art and Anthropology Project, where five local artists and five Filipino-American artists collaborated in exhibitions and murals, which were executed in Chicago and Manila. Drawing inspiration from the more than 10,000 Philippine artifacts at the Field Museum, the mural painted in the Philippines was part of the exhibition entitled “Art and Anthropology: Portrait of the Object as Filipino”. Participating arts were Leonardo Aguinaldo, Jennifer Buckler, Elisa Racelis Boughner, Cesar Conde, Florentino Impas, Jr., Joel Javier, Emmanuel Garibay, Trisha Oralie Martin, Jason Moss, and Othoniel Neri.

Although still at a fledging stage, the Erehwon Center for the Arts has already gone through great strides in its mandate to promote Philippine art to a larger public. It has gone through great lengths to create opportunities for artists, and experiences for its viewing public. It has opened its doors to artists from all over the Philippines, American, and Japan; with its residency programs and open dormitory.

Despite its dynamic trust and numerous activities, the Erehwon has also had its fair share of setbacks. With the exiting of the Daloy dance troupe, the dance hall still seeks a dance troupe to call it home. And with the death of its Artistic Director, Dario B. Noche (1949-2015), and resident Art Scholar, Dr. Reuben Ramas Cañete (1966-2017), the Erehwon family has become a little smaller. Beyond these sad events, Erehwon has survived and continues to grow. . . 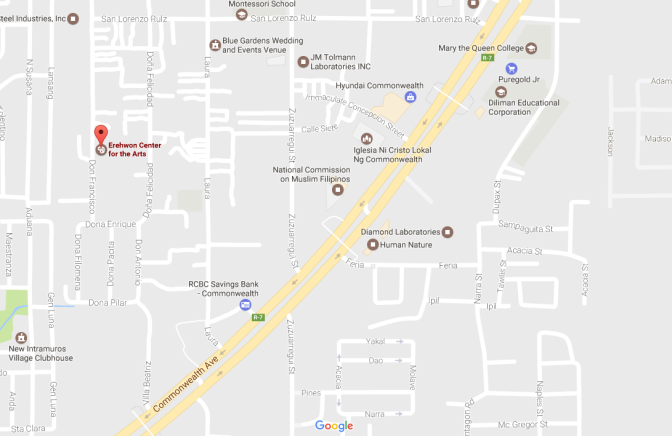