In the Philippines, the Visita Iglesia, or Seven Churches Pilgrimage,  is a tradition among the Roman Catholic faithful, to conduct a pilgrimage to visit seven churches and recite the Via Crusis (Way of the Cross or Stations of the Cross) during the Lenten Holy Week. The Visita Iglesia started with the medieval pilgrimages in Rome, and grew with the pilgrim’s routes that were developed by the Crusaders, such as the England to Rome pilgrimage called the Via Francigena. The ritual was further popularized by Saint Philip Romulo Neri (1515-1595) in 1553.

The rite of the Via Crucis is also an ancient tradition that started during the early Christianization of Byzantine Empire. The faithful in Jerusalem would commemorate the passion and death of Jesus Christ, by following the path called the Via Dolorosa (Way of Sorrow), which started at the Mount of Olives and ended at the Church of the Holy Sepulchre. This activity was enforced by Saint Francis of Assisi (1181-1226), who venerated the Passion of the Christ.

The inclusion of the Via Crucis to the Seven Churches Pilgrimage came naturally, as both rituals were conducted on the Maudy Thursday, of the Holy Week. In the Philippines, some pilgrims would try to express a greater devotion, by visiting fourteen churches.

This pilgrimage starts at the Holy Trinity Parish along Doña Ana Candelaria and Geraldine Streets, in the Don Jose Heights Subdivision. Exiting Doña Carmen Avenue into the northbound land of Commonwealth Avenue, the pilgrim turns right at Atherton Street, and into the North Fairview Subdivision, to visit the Divine Savior Parish. Returning to the northbound lane of Commonwealth Avenue, the pilgrim turns right at Mindanao Avenue, and into Belfast Street, to visit the Mary, The Queen Parish. Turning back into the eastbound lane of Mindanao Avenue, one enters Quirino Highway and follows the eastbound route, to reach the Sacred Heart Novitiate. Afterwards, the pilgrim backtracks on the westbound land of the Quirino Highway and stops at the Holy Cross Parish, in the Amparo Village. Moving southwest along Quirino Highway, one will reach the oldest church in Novaliches, the Diocesan Shrine of Our Lady of Mercy. Then reaching the next intersection, the pilgrim enters General Luis Road and continues towards Damong Maliit Road; where we end the pilgrimage at the Ina Ng Buhay Parish.

Inside the Don Jose Heights Subdivision, the Holy Trinity Parish is located at the corner of Doña Ana Candelaria and Geraldine Streets. The church first started as the St. Anthony Sub-Parish in 1982, on Chopin Street, in the nearby Ideal Subdivision. But at the population in grew, so did the demand for a larger place of worship led to the donation of a larger parcel of land by Desiderio Clan inside the Don Jose Subdivision. The present structure of the church was completed in 2002, and it features clean modernist lines that draw inspiration from the multi-layered roofs of Southeast Asian homes and temples.

The Parish of the Divine Savior is located along Archers Street, in the North Fairview Subdivision. The church was established in 1993, as a sub-parish of the Good Shepherd Vicariate. Upon its elevation to a parish, the residents pooled their resources to build a new church on the same site. Construction began in 2008, and was completed in 2011 as a sleek, open-aired church. Under the Divine Savior Parish are the sub-parishes of the St. Joseph the Worker Chapel (SSS North Fairview Homes), Risen Lord Chapel (Fairmont Subdivision), and Sacred Heart of Jesus Chapel (Phase 8, North Fairview). 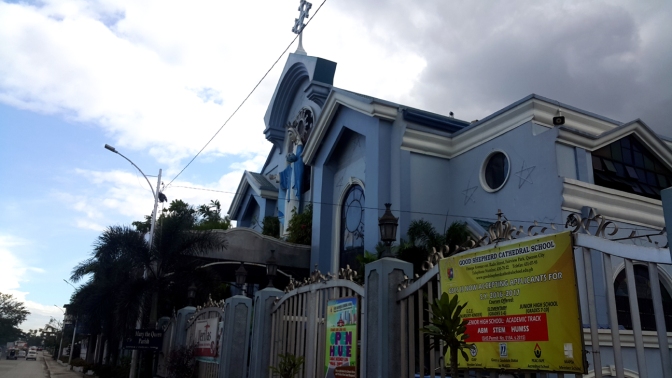 The Mary the Queen Parish started in the early 1980s, as a makeshift chapel in a model house owned by OPJ Corporation, in Teresa Heights, Novaliches. The theft of the Blessed Sacrament in the tabernacle led to the demand for a permanent place of worship, and The Mary the Queen was formally established in 1989. The new chapel was moved to Madaling Arawa Street, and it also became the home of the Servants of the Holy Eucharist Convent. In 1996 the chapel was now elevated to a parish. And as the community began to grow, a new lot was obtained along Belfast Street, and the present structures of the Mary the Queen Parish was completed in 2006. The church was originally led by priests of the Society of Our Lady of the Most Holy Trinity (SOLT), before its transfer to the Diocese of Novaliches in 2006. 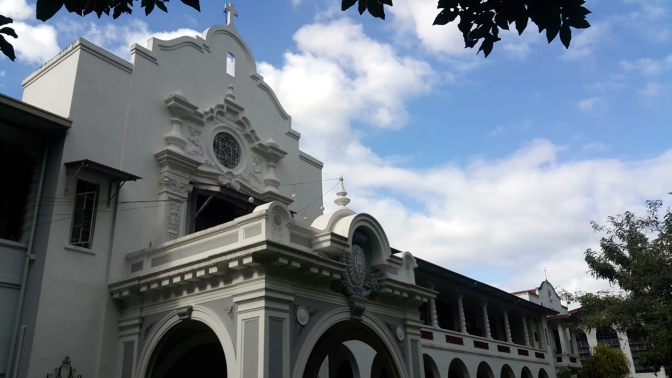 The Sacred Heart Novitiate is a Jesuit seminary, located on a vast tract of land along Quirino Highway. Constructed in 1933, the first buildings were designed by Arch. Fernando Hizon Ocampo (1897-1984), including its Art Deco Chapel. Throughout the compound, there are religious icons by noted sculptors Joseph Sibbel (1850-1907), Anastacio Tanchauco Caedo (1907-1990), and National Artist Napoleón Isabelo “Billy” Veloso Abueva (born 1930). Aside from the statues, there are also painting by Jose Lorenzo de Ocampo (1906–1995), Cesar Buenaventura (1922-1983), Patoy Estano, and Fr. Timoteo Jose M. Ofrasio S.J.

The Holy Cross Parish was established in 1982, in the Amparo Village. Located at the corner of Mangga and  Makabud streets, this simple modernist church is managed by the priests of the Society of Our Lady of the Most Holy Trinity (SOLT). The sub-parishes under the Holy Cross are Our Lady of Guadalupe (Guadanoville Subdivision), Our Mother of Perpetual Help (Horacio de la Costa Homes II), Immaculate Conception Chapel (Victory Heights), Our Lady of the Pillar (Midway Park Subdivision), Our Lady of Fatima Chapel (Camarin Road), and the Holy Family (Sanana Ville).

6. Diocesan Shrine of Our Lady of Mercy, Quirino Highway

The Nuestra Senora de la Merced (Our Lady of Mercy) was established in 1856, as the Chapel of the Corpus Christi, a year after the founding of Novaliches district. The church’s name was soon changed after the icon of Our Lady of Mercy, which was brought to the Philippines by the its first parish priest, Padre Andres Martin, O.S.A. The old church was razed to the ground during the Katipunan Revolution, and was only reconstructed in 1928. As the decades passed, continual improvements were added to the church, including a carved altarpiece and image of the Our Lady of Mercy by Wilfredo Layug in 2007, and an an 18-bell carillon, in the church’s belfry, in 2009. On On September 15, 2008, the parish church was proclaimed a diocesan shrine by Bishop Antonio Tobias, with its first appointed Shrine Rector was Fr. Montecarlo Viloria.

The Ina Ng Buhay Parish (Mother of Life) in Jordan Heights, Damong Maliit, was formally established as a parish in 1994. However, its history started as a small chapel in 1986, as a sub-parish of the Our Lady of Mercy. When the Ina ng Buhay Catholic School was opened in 1991, there was a growing demand for a parish church in the dense populated area. The church continues to grow to serve its parishioners, which includes the construction of a Perpetual Adoration Chapel and Multi-Purpose Pavilion and Social Hall, in 2015.

This is the second part of the Visita Iglesia series, to explore the Roman Catholic churches of Novaliches. There are more parishes that will be features, but not all. The next article will continue from Barangay San Bartolome, and move all the way to Tandang Sora Avenue. 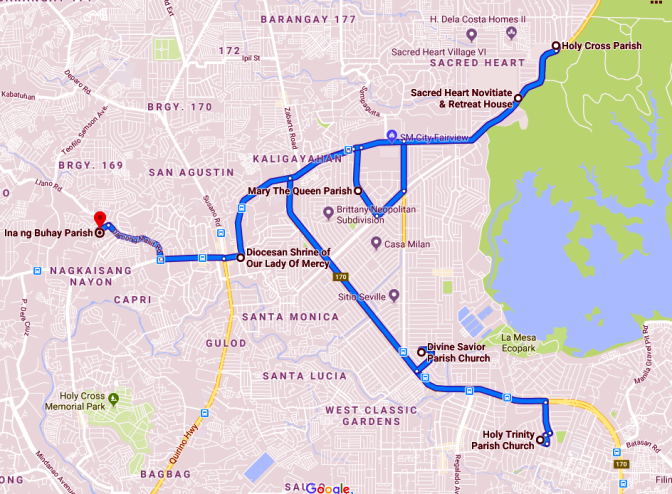