The Lenten tradition of the Visita Iglesia, or Seven Churches Pilgrimage, and it reflects the solemnity of the season, and the Filipino Catholic’s desire to emulate the Passion and Death of Jesus Christ. On Maundy Thursday of the Holy Week, the faithful would visit seven churches to recite the ritual of the Via Crucis (Way of the Cross). In the past, pilgrims would recite the whole 14 stations in each church they visit, where as now they would either recite the whole rite in one church, or two stations for each church.

This need to sacrifice one’s self is an act of devotion and penance by the pilgrim. In fact, some Filipinos would bring this concept of sacrifice to an extreme level, by having themselves crucified or whipped bloody on a Good Friday, to imbibe the suffering of Jesus Christ. As for the squeamish and less daring, moving from one church to another and reciting prayers is a safer means of exercising their faith.This pilgrimage starts in Novaliches with the San Bartolome Parish, along Pablo Dela Cruz Street and returning to westbound lane of Quirino Highway. Turning right at the Pagkabuhay Road, the pilgrim visits the Resurrection of Our Lord Parish, beside the entrance to the Bagbag Public Cemetery. From the cemetery, one winds along the roads of Noah, King Charles, King Alexander, King Christian, King Christopher, and King Ferdinand streets, to enter Kingspoint Subdivsion from Katipunan Avenue; and visit the Christ, King Of The Universe Parish. Retracing one’s steps, the pilgrim returns to Quirino Highway and cross to Bernardino Road and moving straight t Seminary Road, which leads the chapel of the Our Lady of the Angeles Seminary (OLAS). Returning to Quirino Highway, the pilgrim travels southward, and turns left at Mindanao Avenue, and stop at the Our Lady of the Annunciation Parish. Afterwards, the pilgrim travels south of Mindanao Avenue and turns right at Road Twenty, and drives all towards the GSIS Village to visit the Holy Family Parish. Returning to Mindanao, pilgrim continues the southbound route, and turns right at Road 8, to end the pilgrimage at the Our Lady of Hope Parish, in Barangay Bagong Pag-asa.

Although the San Bartolome Parish was established on June 19, 1986, as a small chapel along the Pres. Quirino Highway, its history stems from a myth from many years back. According to some old parishioners, there was an image of the Apostle Bartholomew that miraculously appeared in a hollowed part of a tree in a neighbor’s yard. Many priests from far and wide tried to remove the icon from the tree, and failed.  And when the parish priest of San Bartolome de Malabon pulled the statuette from the tree, the residents decided to name St. Bartholomew as the patron of the barangay, and put a chapel to commemorate the phenomenon. As the community began to grew, a new church was needed to accommodate the population, and in 2007, the new San Bartolome Parish was inaugurated along Pablo del Cruz Street. Designed by Arch. Manuel T. Mañosa Jr. and Arch. Susan S. Castillo, the church is a modernist masterpiece, with the typical baroque pieces, such as the altarpieces at the nave and transept.  Another feature of the church is its beautiful stained glass windows, and paintings of the Stations of the Cross, which are 14 large painted reproductions of famous works on the Passion of the Christ, by a certain Jessie C. Lores. These 14 paintings were based on works by Constantino Brumidi, Fillipo Costaggnini, Svitozar Nenyuk, and Leonard Porter.

The Resurrection of Our Lord Parish, in Barangay Talipapa, is also known as the Parokya ng Pagkabuhay (Parish of Living). Founded by Franciscan friars in 1978, who had previously administered masses at the nearby Our Lady of the Angels Seminary (OLAS, founded 1962). With the formation of the parish, the Franciscans also established the Pagkabuhay Parochial School in 1983, which would eventually evolve into the Resurrection Catholic School in 1998. The Pagkabuhay Parish is a very modest modernist structure; which also services the families who seek necrological services at the Bagbag Public Cemetery, right beside the church.

The Christ, King of the Universe Parish is located in the center of Kingspoint Subdivision, at the eastern side of Barangay Bagbag. The church started as a simple chapel in 1980, but it had to be continually renovated to accommodate the ever growing population in the area. After years of petitioning to the Archdiocese of Manila, the Christ, King of the Universe Parish was finally completed and blessed in 2004. A simple modernist architectural style, with accent lines in stained glass, the exterior and surrounds of the parish are accentuated with near life-sized sculptures of the Twelve Apostles on the church sides, angels of the front façade, and the fourteen Stations of the Cross in the gardens surrounding the church. Inside the church, the simple wooden linear accents contrast to the elaborately ornate retablo (altarpiece).

4. Chapel of Our Lady of the Angels Seminary-College, Seminary Rd., Bagbag

Our Lady of the Angels Seminary (OLAS) was founded in 1962 by the Franciscan friars of the Order of Friars Minor (OFM), the OLAS opened in 1963. Also called the Our Lady of the Angels Franciscan Seminary, the OLAS is the first major seminary of the OFM, and it was named after the Papal Basilica of Saint Mary of the Angels (Santa Maria degli Angeli) in Assisi, Italy. For years, the small chapel of the OLAS served as the spiritual center for the faithful of the barangays of San Bartolome, Talipapa and Bagbag; however the ever growing population was proving too much for the OLAS to accommodate. In the decades to come, the parishes of San Bartolome, Christ, King of the Universe, Pagkabuhay (Resurrection of Our Lord), and Banal na Sakramento (Holy Sacrament) were constructed; yet still there were others residents who would continue to go to mass at the OLAS. To accommodate the flux of people, the Our Lady of the Angels Porziuncula Chapel was opened and blessed on August 2, 2014. The church is inspired by the small chapel found inside the Santa Maria degli Angeli, in Italy. The church’s modernist structure is accentuated by the Romanesque styled paintings at the altar, similar to the artworks found at the Santa Maria degli Angeli.  Porziuncula means “a small portion of land” in Latin.

5. Our Lady of the Annunciation, Mindanao Avenue

The Our Lady of the Annunciation Parish Church: Shrine of the Incarnation started as a chapel dedicated to Saint Charbel Makhlouf OLM (1828-1898), in a nearby residential subdivision. And in 1992, the Our Lady of the Annunciation Parish, and structure was designed by Architect Luis Nicanor Aguirre IV. Partially dedicated to St. Jean-Baptiste-Marie Vianney (1786-1859), patron saint of parish priests, the church is modernist is design, with accents of Gothic inspiration. Inside are beautiful paintings by Pancho Piano, and an 18 foot tall statute of the Risen Christ by Fredie Acuña.

The area of Bahay Toro was named after the many water buffalo (Carabao) grazing in the rice fields, before any urban development commenced with the expansion of Quezon City. In the late 1950s, employees of the Government Service and Insurance System (GSIS) were awarded land titles, and the GSIS Village was created. Soon the residents erected a small chapel in the early 1960s, which slowly grew into a major convergence for religious and social functions. Holy Family Parish was later constructed in 2003, and declared a Quasi-Parish, under the Vicariate of Sto. Niño, Diocese of Cubao. The Holy Family Parish is a simple open-aired low-ceilinged modernist structure, with stained glass windows that accentuate the church’s façade.

The Our Lady of Hope Parish started as a small hut housing an image of San Isidro Labrador (1070-1172), patron saint of farmers, in Barangay Bagong Pag-asa (New Hope); with the first mass held on May, 1956. With an ever growing population of people moving into the area, construction of the church began in 1960, and it was completed in 1966. The new parish was named after the Our Lady of Pontmain, also known as Our Lady of Hope; who appeared in the small French town of Pontmain, on 17 January 1871. This was the height of the Franco-Prussian War, and the Marian apparition is credited to the cessation of hostilities on both sides of the war.  At the parish, a giant figure of Our Lady of Hope juts from the church façade, decked in her robe of stars. Inside the church is a highly ornate Baroque styled retablo (altarpiece) set, which contrasts the simple and stark while lines of the church’s architecture.

It is interesting how all these churches vary in size and shape, yet have the simplicity of modernist structure and design. Yet amidst that simplicity, Filipinos cannot escape the need to embellish the interiors with Baroque inspired designs, which links us to the true Baroque structures that were built during the Spanish Occupation of the Philippines (1521-1898). This ornate decoration is not just a signifier of Filipino highly detailed design aesthetic, but our continual celebration of history and tradition; just like the practice of the Visita Iglesia. 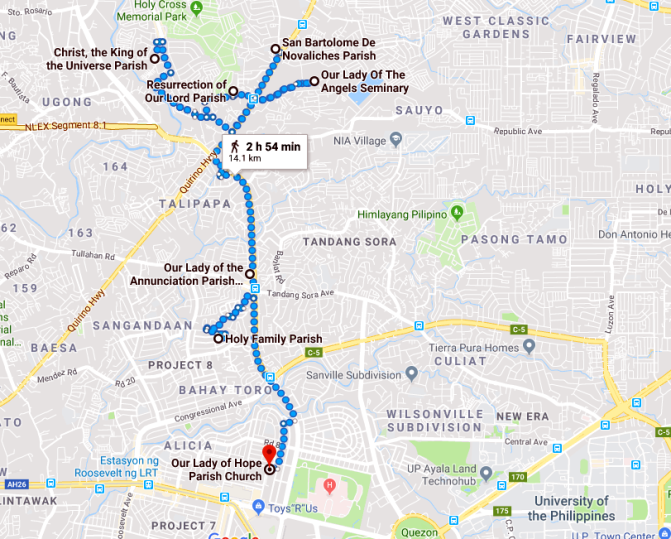