The Our Lady of the Annunciation Parish Church: Shrine of the Incarnation is located in the St. Dominic III Subdivision, along Mindanao Avenue, Barangay Tandang Sora. The parish started with the construction of the chapel dedicated to Saint Charbel Makhlouf OLM (1828-1898), in 1991, at a nearby residential subdivision. As the population in the area began to grow, residents clamored for their own parish church, and the Our Lady of the Annunciation Parish was founded in 1992.

The present church structure was completed and blessed on November 24, 2000. Designed byAdamson University alumnus, Architect Luis Nicanor Aguirre IV, the church is modernist in design, with accents of Gothic inspiration. These medieval accents are most evident at the bell tower and the cross, on the roof of the church. The church is also partially dedicated to St. Jean-Baptiste-Marie Vianney (1786-1859), patron saint of parish priests. 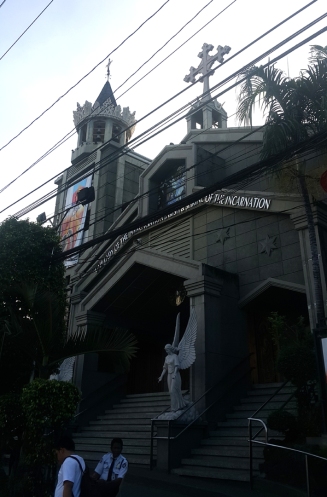 1992 Luis Nicanor Aguirre IV – Our Lady of the Annunciation

1992 Our Lady of the Annunciation, Angel Gabriel

Another eye catching feature of the church are the near life-sized angels, standing beside the church steps, welcoming visitors. The open hands of the angels not just signify the acceptance of the faithful, but also commemorated the appearance of the Archangel Gabriel to the Blessed Virgin Mary, as he announces that she is the handmaid of God.

Climbing the stairway, the visitors are greeted by the massive wooden doors, carved with the images of the Four Evangelists of the Gospels. From left to right, the saints are Saint John, Saint Matthew, Saint Mark and Saint Luke. All four are accompanied by their respective symbols of the eagle for St. John, the cherub for St. Matthew, the winged lion for St. Mark, and the winged bull for St. Luke.

The side doors are also carved word, with the symbols of the Holy Eucharist or Holy Sacrament. The grapes represent the wine as the blood of Christ, and the host is the bread that denote to body of Christ. Both symbols come together with the Chalice, which signify Christ’s sacrifice for the salvation of mankind.

Entering the church, one notices the gigantic figure of the Risen Christ, standing at the altar. Sculpted by Ferdie Acuña, in 1995, the statue towers at 18 feet (548.64 centimeters). The Risen Christ is a breakaway from the traditional Crucified Christ seen in most churches.

Ferdinand Austria Acuña (born 1965) is a self-taught artist, who originally hails from Sta. Ana, Manila. Acuña took his formal studies in architecture at the Technological University of the Philippines (TUP), and became friends with the Fine Arts students. Unable to complete his studies, due financial constraints, Acuña dropped out of TUP and started sculpting and painting. Joining several local exhibitions, Acuña was notice by the parishioners of his hometown of Sta. Ana. In 1990, he was commissioned to create several pieces for the heritage church of the Parish of Our Lady of the Abandoned, Sta. Ana. The exposure from this commission led to several solo exhibitions, and an Outstanding Alumnus for his high school alma mater, Arellano University. However, politics in the Manila art community disheartened Acuña, and he transferred to the island of Boracy, where he continues to paint and sculpt.

Looking around the interior of the church, one will also notice the many paintings of Pancho Piano. Although residing abroad, Piano regularly returns to the Philippines, and his close ties to the parish priest led to the commission of several painting from 1997 to 2008. At the left transept is Piano’s 2008 painting of “The Annunciation”, where the Archangel Gabriel appears to the Blessed Virgin Mary, and announces that she has been chosen as the handmaiden of God, and that she bears the child Jesus in her womb (Luke 1:26-38).

At the right transept, Piano’s 2008 painting of “The Angel visits St. Joseph, the Carpenter”, depicting how the Angel of God appears to St. Joseph in a dream, to accept Mary as his wife and Jesus as his child, after he discovers that she is pregnant (Matthew 1:18-25).

At the rear of the right aisle is Piano’s 2008 painting of “The Baptism of Jesus, by St. John the Baptist”, where Jesus comes to John the Baptist, to be anointed at the River Jordan (Matthew 3:13-17).

And at the ceiling of the narthex, Piano’s 2008 painting of “The Fall and Redemption of Man” shows Adam and Eve falling from the grace of God, and are expelled from the Garden of Eden (Genesis 3:1-24). And in the center of the painting are the figures of the Blessed Virgin Mary and the Child Jesus, which signified the salvation of man.

1997 Pancho Piano – Via Crucis I: Jesus is condemned to Death

1997 Pancho Piano – Via Crucis VI: Veronica dries the sweat from the Face of Jesus 2

Finally, on the walls of the aisles are Piano’s 1997 paintings of the Via Crusis, which depict the fourteen stations of Christ’s condemnation and death. In this collection, Piano creatively expresses the stages of the Passion of Christ, by his colorful renditions of hands that enact each scene.

1997 Pancho Piano – Via Crucis X: Jesus is stripped of His Robes

1997 Pancho Piano – Via Crucis XI: Jesus is nailed to the Cross

1997 Pancho Piano – Via Crucis XII: Jesus dies on the Cross

1997 Pancho Piano – Via Crucis XIII: Jesus is taken down from the Cross

1997 Pancho Piano – Via Crucis XIV: Jesus is laid in the Tomb

Pancho Mistula Piano (born 1954) is a painter, who is most known for his stained glass works and leather art. Piano first graduated with an Economics degree from the University of Nueva Caceres, but he felt more inclined towards the arts. From 1984-1987, Piano entered the University of the Philippines (U.P.) School of Fine Arts, under a Jose Joya scholarship. Piano has won numerous art competitions, and has represented the Philippines in many exhibitions abroad. Piano’s most recent significant honors are the Most Outstanding Bicolano Artist 2009, My City My SM Award 2010 and Orgullo Kan Award for Visual Arts 2011.

Although the Our Lady of the Annunciation Parish Church: Shrine of the Incarnation is a major landmark in Quezon City, non-residents to not take the time to stop by and marvel at the beauty and artistic treasures found in the parish. Situated along a busy highway, with vehicles zooming by, the church beckons people to slow down and take the time to stop, and even have a quite time to reflect.

3 thoughts on “Novaliches, Quezon City: Our Lady of the Annunciation Parish Shrine of the Incarnation, Mindanao Avenue”