The residential area called Project 8, in Quezon City was part of the original plan of Pres. Manuel Quezon (1878-1944) to build a new capital for the Philippines. These “Projects” were part of Pres. Elpidio Quirino’s continuation of Pres. Quezon’s vision, which was jump started by his predecessor Pres. Manuel Roxas (1892-1948), as part of the rebuilding of the Philippines after World War II (1938-1945). The residential projects for blue collared workers and low ranking employees started with the Barrio Obrero (barrio of the workers), which would be later renamed after the flowering trees that grew in the area, the Kamuning (Murraya Paniculata). Project 8 in turn is sometimes  Bahay Toro (Home of the Bull), because of the many water buffalo (Carabao, Bubalus Bubalis) grazing in the rice fields, before any urban development commenced with the expansion of Quezon City.

In the late 1950s, employees of the Government Service and Insurance System (GSIS) were awarded land titles in Project 8, and the GSIS Village was created. As time passed, residents of the various housing projects began to grow wealthier, as local businesses began to boom. Soon the residents erected a small chapel in the early 1960s, which slowly grew into a major convergence for religious and social functions. Demanding that the area be give its own parish, the Holy Family Church was finally constructed in 2003, and declared a Quasi-Parish, under the Vicariate of Sto. Niño, Diocese of Cubao.

The Holy Family Parish is a simple open-aired low-ceiling modernist structure, with simple geometric stained glass windows that accentuate the church’s façade. The shape of the church is in a six-sided fan-like structure that “spreads” towards the southwest direction. However despite the very modernist design, inside is a very ornate Baroque styled altarpiece that contrasts sharply against the sleek lines of the modernist edifice.

The altar is made of faux marble, which is embellished with resin Baroque styled floral motif and painted in gold. At the left niche are images of the Sagrada Familia (Holy Family), while at the center is the Crucified Christ. And finally at the right niche is an icon of the Immaculate Conception.

Despite the strong contrasts between the classical and modernist themes, the combination of both seem to work well together, as the altar becomes the focal point of all attention, with the ceiling beams creating a centrifugal pattern, likened to rays of light emanating from the altar.

The Holy Family Parish is another example of the ingenuity of Philippine religious architecture, where old and new styles blend and complement each other. Much like the nature of the Filipino, whose traditions are kept and venerated, yet evolved with the people. 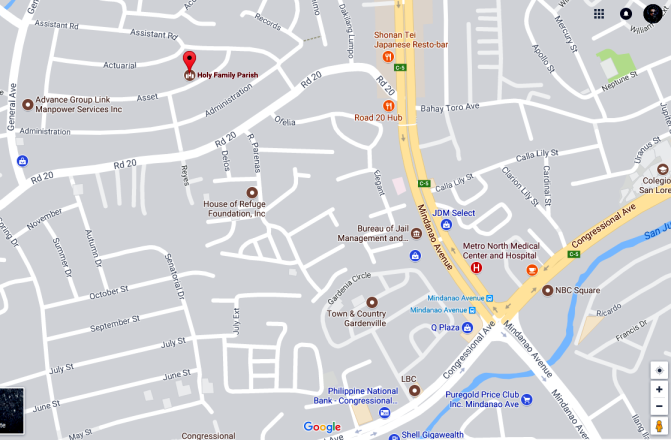