Hidden behind the congested streets of Doña Juana Homes, the Parish of San Jose: Ang Tagapagtanggol stands with dignity above the clutter of houses, small business stalls, tricycles and jeepneys of the neighborhood. The parish’s history began in 1978, as a small chapel that served the community, for those who could not attend mass at the chapel of School of the Holy Spirit, 2 kilometers away, in the nearby BF Homes.

As the community began to grow, the need for a larger church was needed, and construction started in 1989. Completed in 1992 and elevated into a parish in 1997, the residents selected the name of San Jose Ang Tagapagtanggol (St. Joseph, The Protector); in celebration of the saint’s role as the protector of the Holy Family and the Church.

In 2007, administration of the San Jose Ang Tagapagtanggol was taken over by the Franciscan priests from the nearby Our Lady of the Angels Seminary. The Franciscans immediately acted to renovate the church, including adding a new retablo (altarpiece), which was created by the people of the famous sculptor’s town of Paete.

Contrasting to the simple modernist church, the altar was carved in the intricate and traditional Baroque style, and was installed in 2010. Decked with gold painted angels, eagles, and floral motifs; the retablo houses the icons of parish’s patron St. Joseph, the Franciscan patron of lost objects St. Anthony of Padua (1195-1231), the traditional centerpiece of the Crucified Christ, the founder of the Order of Friars Minor (OFM) St. Francis of Assisi (1181-1226), and the Immaculate Conception of the Blessed Mother Mary.

The base of the altar table is a pelican mother feeding her young, while flanked by two angels kneeling. The pelican is an ancient symbol that was adopted by the Christians to symbolize Jesus Christ and the Catholic Church. According to the belief, during times of food scarcity, the mother pelican would tear flesh from her own body to feed her starving young. This act of self-sacrifice is compare to how Jesus has given his own life for the salvation of humanity. 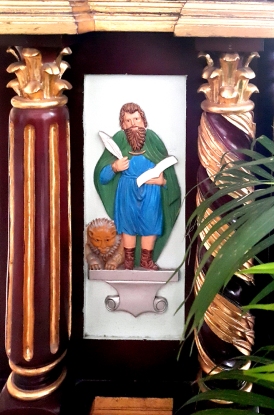 Aside from the altar table and retablo, the lectern is just as intricately carved with interesting motifs. Aside from the traditional icons of the four Evangelists: St. John, St. Luke, St. Mark and St. Matthew; the central image is that of the Annunciation, where the Archangel Gabriel appears to Blessed Mary, to announce that she is to bear and conceive the Messiah. A secondary lectern is located at the right side of the altar; which is simpler than the rest of the altar fixtures, with the cross hands bearing the stigmata of St. Francis and the Tau Cross symbolizing the  Order of Friars Minor.

At the transept walls and the panels of the retablo, there are paintings by Romeo Monte, from the province of Pampanga. In 2005, Mr. Monte had created several painting for the Our Lady of the Angels Seminary, and he was called again to share his talents for the parishioners of San Jose Ang Tagapagtanggol.

The second panel of the left transept shows the angel approach St. Joseph in a dream to accept the pregnant Mary, St. Jospeh holding the infant Jesus, and the Holy Family at St. Joseph’s carpentry shop. St. Joseph and the angel was taken from the 1690 painting of Francesco Trevisani (1656-1746) entitled “The Dream of St. Joseph”, which was originally at Villa Reale di Poggio a Caiano, before being transferred to the Galleria degli Uffizi, Florence, Italy.  St. Joseph and the child Jesus was inspired by the 1635 painting of Guido Reni (1575–1642) entitled “San José con el Niño”, which is now located at the Hermitage, in St. Petersburg, Russia. The St. Joseph the Carpenter was copied from the Standard Publishing‘s (founded in 1865, USA) artwork in their Classic Bible Stories from the 1950s.

2010 Romeo Monte – Annunciation, Flight to Egypt, & Presentation of Jesus at the Temple

Presentation of the Child Jesus in the Temple

The first panel on the right transept features the Archangel Gabriel announces to the Blessed Virgin Mary that she has been chosen to be the handmaiden to bear the Messiah, the Holy Family’s flight to Egypt to avoid the soldiers of Herod, and the presentation of the infant Jesus at the Temple of Solomon, where he is blessed by the blind Simeon. The Annunciation was based on 1572 painting of El Greco (Doménikos Theotokópoulos , 1541–1614) of the same title, which is now housed at the Museo del Prado. The Holy Family’s flight is partially taken from the 1601 painting by Joachim Anthonisz Wtewael (1566-1638) entitled “The Flight into Egypt”, at the Central Museum in Utrecht, the Netherlands. And the Presentation of the Child Jesus in the Temple is inspired by another artwork from the Standard Publishing’s Classic Bible Stories.

The second and final panel on the right transept features Jesus Christ and the Blessed Virgin Mary accompanying St. Joseph at his death bed, St. Joseph enters heaven and is crowned by Jesus as the protector of the church, and the Holy Family. The Death of St. Joseph is based on a painting by an unidentified artist, which is located at St. Bridget Catholic Church, Virginia, USA. St. Joseph’s entry into heaven is taken from the 1670 Juan de Valdés Leal (1622–1690) entitled “Coronación de San José”. The Holy Family is inspired by the 1650s painting by Claudio Coello (1642–1693) entitled “Sagrada Familia”, at the Szépművészeti Múzeum, in Budapest, Hungary.

Romeo Ruedas Monte (born 1941) is a figurative painter from the province of Pampanga. Montes born in Camarines Norte, province of Bicol, and his family would transfer to Manila years later. His father, Francisco Sibulo Montes, was an architect who influenced him to take up architecture at the Manuel L. Quezon University, where he also excelled as an athlete; however he was unable to complete his studies after three years. After he dropped out, Montes started working in different jobs. During that period, he met and married Daisy Anne Gonzalez, daughter of the fames portraitist Felix Pinto Gonzalez. While living in the Gonzalez home in Pampanga, Monte was inspired to pick up the brush, and started painting with whatever material he could get his hands on, while learning from observing his father-in-law and brother-in-law’s techniques. He officially started his career as an artist in 1974, and soon was active in the Art Association of the Philippines (AAP), and later became president Angeles Artist Association. Monte would continue to painting in his studio in Pampanga, while exhibiting locally and internationally. He put up his own gallery and framing shop in Angeles city, where he would continue to nurture the next generation of Kapampangan artists. For a while, Monte would teach about art in the Columbia College in Olangapo City, as well as give art workshops all over the country. Monte has also been participative in many civic programs, and has been an active member of the Board of Directors of the Rotary Club of Angeles City North. Because of his growing network, Monte has also created many paintings for parishes from Bicol to Pampanga; and because of his outstanding community and artistic endeavors, he was awarded Lira Pampanguenña’s Outstanding Artist of the Year in 1978 and Outstanding Business Executive of the Year in 1983.

The paintings of Romeo Monte and the other images at the San Jose Ang Tagapagtanggol are not an attempt to create cheap reproductions of masterpieces, but rather they are expressions to introduce to the faithful the semblance of the opuses and the great stories behind these images. The San Jose Ang Tagapagtanggol does not attempt to be as grandiose as other churches, instead it focuses on the lessons that these artworks imply.