Exploring the 4th Floor of the Metropolitan Waterworks Sewerage System (MWSS) Administration Building, in Quezon City, is a venerable who’s who in the Philippine art scene during the late 1970s. Visitors are already treated to a cornucopia of paintings at the 4th floor lobby, and it continues throughout the offices. The Director’s Office is another reflection of this priceless collection, which was instigated by then First Lady Imelda Marcos Romuáldez (born 1929), to promote the Philippine art and culture in all government offices.

Almost all the artworks at the MWSS have theme revolving Philippine culture, and Al Perez’s “Nipa Hut” is no different. Breaking away from his noted brightly light colonial church paintings, Perez presents a somber yet nostalgic barrio scene, which harkens to his childhood in Hagonoy, Bulacan.

Al Pérez is a painter originally from the province of Bulacan, and is initially known for his paintings of Philippine colonial churches. Prerez firt took his formal art studies at the University of Santo Tomas (UST), and continued his arts education at the The Artist League of New York U.S.A. (1984) and at the School of Usual Act New York (1996). Perez’s themes grew from an interest in preserving Philippine heritage, after the devastation of World War II. Perez has exhibited his works locally and internationally, with the most noted exhibitions as part of the Philippine delegation to the 1986 Cuban Biennale. Although currently residing in Parañaque City, in Metro Manila, Perez frequently retrns to his home town in Bulacan, to help develop the art in the province. He helped organize and worked as the president of the local Lakan ng Bulakan and Hagonoy Group art groups. Another organization that Perez is active in is the famed Tuesday Group of artists. For all his work, Perez has been honored with the Most Outstanding Bulakeno in the Field of Painting in 1980, the Araw ng Maynila Cultural Award for Visual Art in 1989, the Parangal ng Bayan Centennial award in 2000, and the Huwarang Pilipino Award in 2001.

Angelito Antonio breaks off from his bright palette, to present a somber black-and-white piece: “Mangingisda” (Fishermen). In this work, Antonio gives dignity to the Filipino fishermen, despite the hardships of their daily lives. The use of the black-and-white creates a stark focus to the woman in the center of the images, and her strength as she supports her husband in hauling the catch of the day.

Angelito Antonio (born 1939) is a painter from Bulacan, who as a expressionist painter, however his evolution in art have moved towards sublime cubist works and abstraction. Antonio took his formal art studies at the University of Santo Tomas (UST), where he met and later marry his colleague Norma Belleza, and has three children with her. His painting “Dying Bird” has been considered as a masterpiece of Philippine painting, by the Banko Sentral ng Pilipinas. In 1970, he was honored the Thirteen Artist Award by the Cultural Center of the Philippines (CCP). In 1984, he was also honored with the Patnubay ng Sining at Kalinangan Award by the City of Manila.

Hernando R. Ocampo’s Untitled Abstract in Red & Black is typical of this modernist vanguard’s latter style of simplified amorphous forms that play tricks with the minds of viewers, whether they perceive a hidden image or not. Whether it is a woman in a flowing dress, a farmer with his carabao or just a abstract expression of the artist’s feelings, no one will truly know unless the real title of the artwork is discovered.

Hernando Ruiz Ocampo (1911-1978) was a self-taught painter who started in a cubist style, before becoming one of the first masters of abstractionism in Philippine art. He was part of the first “13 Moderns”, who pushed the envelope Philippine art towards modernism. Ocampo first studied law and commerce, before taking up creative writing. He established himself as a noted poet, playwright, fictionalist, editor, and a scriptwriter and director for television; in which he was known to have written for Palaris Feler and Fernando Poe Productions, and produced and directed for the Filipino Players Guild. Many of his articles could be found in Taliba newspaper and Manila Sunday Chronicle magazine. Ocampo also branched out to business, where he started working at the Philippine Education Company (PECO) in 1931, and he worked as executive secretary of the National Paper Mills Inc. in 1935. As an artist, he was honored with Republic Cultural Award in 1965; Patnubay ng Sining at Kalinangan Award in 1969; Diwa ng Lahi Award in 1976; Gawad CCP para sa Sining Award in 1979; and the posthumous recognition as National Artistin 1991.

Angelito Balagtas’ “Inang Masinop: Hapunan” (The Fastidious Mother: Dinner) shows a mother balancing the chores of putting her child to sleep, which gutting her husband’s catch to prepare for dinner. Behind her is her husband and another male relative, as they fishing nets.

Angelito Balagtas (born 1947) is a figurative painter who depicts genre scenes of rural folk, rendered in a cubist inspired style. Balagtas completed his formal studies at the University of Santo Tomas (UST) and started exhibiting soon. His work caught the eye of Vicente Manansala (1910-1981), who hired him to be his assistant in completing a series of murals for the United Coconut Planter’s Bank. This collaboration and mentoring by Manansala greatly influenced Balagtas, which shows in his own paintings. Balagtas has been active in various art groups, and has once served as the president of the Philippine Association of Figure Artists.

Ang Kuikok’s “Tandang” (Rooster) represents a cock standing like an intimidating sentry, while branching its sharp bladed talons. Ang Kuikok’s work brings to light the Filipino’s fondness for Sabong (cockfighting), which has been a traditional pastime for more than 700 years.

Ang Kiukok (洪救國) was born as Ang Hwa Shing (1931-2005), to a family of Chinese immigrants in Davao City. His often violent works are a interweaving of cubist, expressionist and surrealist styles. A graduate of the University of Santo Tomas (UST), Ang Kuikok originally had foregone the artistic life, in exchange of teaching English to the children of Chinese expatriates. After winning many painting competitions, Ang Kuikok was awarded the Outstanding Overseas Chinese in Art (1961), the Patnubay ng Sining at Kalinangan Award from the City of Manila (1976), the Outstanding Alumnus award by the UST (1978), and finally the National Artistfor Painting (2001).

Nemiranda’s “Kanduli” shows fishermen hauling their catch of the endemic marine catfish, known as kanduli (Arius manillensis), from the waters of Laguna de Bay. The kaduli is one of the common fish varieties caught in Nemiranda’s hometown of Angono.

Nemiranda or Nemesio “Nemi” R. Miranda Jr. (born 1949) is a painter from the artists’ town of Angono, and is a graduate from the University of Santo Tomas (UST). As a student, Nemiranda would also take lessons from the Mabini artist, Miguel Galvez. Nemiranda’s style is a colorful portrayal of Philippine myths and rural life in a style he coins as “Imaginative Figutism”, and he has held over 50 solo exhibitions locally and internationally. Maintaining his base of operations in Angono, Nemiranda founded the Angono Ateliers Association in 1975 and the Rizal Artist Federation at Philippine Association of Figure Artists in 1986. Nemiranda continues to work side-by-side with local government officials to promote the arts and culture of his home town, and he has also served as the Chairman of the Angono Tourism Council.. Still in Angono, Nemiranda has put up establishments such as the Nemiranda Family Art Museum, Angono School for the Arts, the Nemiranda Art Café, and the Visual Art School Angono of the Rizal High School.

Benny Buendia’s “Countryside Home” is another example of the prevailing romantic portrayal of rural life, and its dignified existence in the face of modernization. In this work, Buendia portrays an old Nipa Hut with a chicken coop built under it, as it stands silently as it it watching the rice paddies across the irrigation ditch and the many banana trees planted around the property.

Benigno “Benny” S. Buendia is a landscape artist, who was originally from the province of Tarlac. A self taught artist, Buendia’s first works showed a muted and somber palette of the some Romantic Realists, before developing his new style of bright colors and strong contrasts that is closer to Fantastic Realism. During the 1970s and 1980s, Buendia was active with fellow Kapampangan artists in promoting the visual arts in the provinces of Tarlac and Pampanga, before migrating to the America. 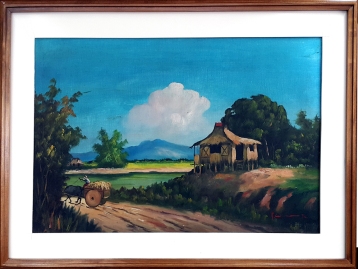 There are two more paintings without documentation of the artist or the titles at the MWSS Director’s Office, and their importance to the development of Philippine art is lost in time. That is why this blog attempts to document and investigate the stories behind the artworks, so that they will be always remembered.