The Our Lady of the Pentecost Parish was first a chapel that was administered by the nearby Sta. Maria della Strada Parish, but as population of parishioners began to grew that both the chapel and church could not contain, so did a demand for a new parish be constructed. And in 2003, the Our Lady of the Pentecost Parish was designed and completed by Arch. Vincent Martin “Veepee” Bondoc Pinpin. Given its unusual corner lot, the church has an odd trapezoidal shape, which Arch. Pinpin was able to mask with the creation of a circular balcony. The open structural beams at the ceilings of the church were left exposed by the construction team, as they discovered that the patterns of the beams created a aesthetic impact of implied movement, despite the all-white interiors of the church.

Arch. Vincent Martin “Veepee” Bondoc Pinpin (born 1967) is a graduate of the Ateneo De Manila University, and he completed his degree in Architecture from the University of the Philippines, Diliman. Aside from teaching Asian Vernacular Architecture at the Loyola Schools, Ateneo De Manila University, Arch. Pinpin has also worked on the redevelopment of several buildings within the Ateneo campus. Pinpin is also the owner of the successful firm, VMBP Architecturals.

The next thing visitors notice is the Victorious Crucifix, by the National Artist, Napoleon Abueva. This bronze piece is one of the few church altar crucifixes that Abueva has creating with the image of a risen Jesus Christ, rather than the traditional death of Christ. The plaster cast study of this sculpture was donated by Abueva to the Jesuit’s Sacred Heart Novitiate, in Novaliches.

Napoleón Isabelo “Billy” Veloso Abueva (1930-2018) studied at the U.P. School of Fine Arts, under National Artist, Guillermo Estrella Tolentino (1890-1976), who was then the director of the school. Although trained in the classical style of sculpting, Abueva broke from its mold and began experimenting on modernist styles and techniques. Soon he became known as and Godfather of Philippine Modern Sculpture. Aside from the many historical monuments that are found all over the Philippines, Abueva has also been commissioned to create sculptures around the world. In his youth, he was awarded the Ten Outstanding Young Men of the Philippines (TOYM) award; which would herald more awards and distinctions in his life. He was proclaimed National Artist for Sculpture in 1976, making him the youngest recipient of this distinction. And just like his mentor, Abueva also served as dean of the U.P. College of Fine Arts.

The next piece of interest is the altar and lectern by Juan Sajid Imao, who uses symbolism on stone, to emphasize the story of the Pentecost (Acts of the Apostles, Chapters 1 and 2). The altar table is constructed of 4 stone slabs, with the rightmost piece carved with an abstracted image of the Blessed Virgin Mary, and the tongue of fire which represents the Holy Spirit that descended on the one hundred and twenty followers of Jesus Christ, 50 days after the Resurrection of Christ in heaven. The other three slabs of the altar are cut into 4 columns each, representing the 12 apostles, including Matthias who had replaced Judas Iscariot. And on the lectern, the tongues of fire are once again, representing the seven gifts of the Holy Spirit: sapientia (wisdom), intellēctus (understanding), cōnsilium (counsel), fortitūdō (fortitude), scientia (knowledge), pietas (piety), and timor Dominus (fear of God).

Juan Sajid de Leon Imao (born 1971) is the second to the youngest son of Abdulmari Asia Imao (1936-2014), the first Moslem National Artist of the Philippines. Sajid, would go on to take up sculpture at the University of the Philippines (U.P.) College of Fine Arts (CFA), just like his father. Early on in his career, Imao was diagnosed with Retinitis Pigmentosa (RP), which would slowly diminish his eyesight. Although this would mean the death of any artist, Sajid took this as a challenge to continue making sculptures. This led to many awards, such as the 2001 Ten Outstanding Young Men (TOYM) award.

Finally the set of the altar is completed by the Presider’s Chairs by Agi Pagkatipunan, with simple symbolism compare to the works of Abueva and Imao. From his workshop in San Mateo, Rizal province, Pagkatipunan created these pieces from discarded wood, and the simplicity of the design reflects the humility of Jesus Chirst. At the back rest of the main throne, the implied cross reminds the viewer that the priest stands as a representative of Jesus Christ.

At the north end of the church is the baptistery, with a simple hewn stone structure, also by Juan Sajid Imao. The two forms represent Saint John baptizing Jesus Christ, at the River Jordan (Matthew 3:13–17).

Another set of works by Imao and Pagkatipunan can be found at the parish’s Adoration Chapel. The entrance to the chapel is door made of recycled wood, by Pagkatipunan.  At the top of the door, the words “Fiat Voluntas Tua” (Your Will Be Done) are carved on the head post. 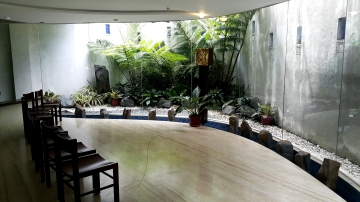 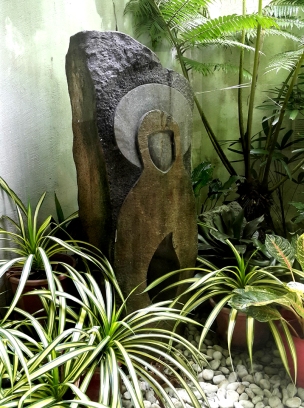 Inside the Adoration Chapel, Imao creates another symbolism of the Pentecost, with the slab of the Virgin Mary set in an enclosed garden, while the twelve apostles are represented by 12 rocks placed at the front of the garden. Instead of the traditional monstrance, the Eucharist is placed within a bronze box, with the tongue of fire representing the Holy Spirit.

Stained Glass, Our Lady of the Pentecost Rondel 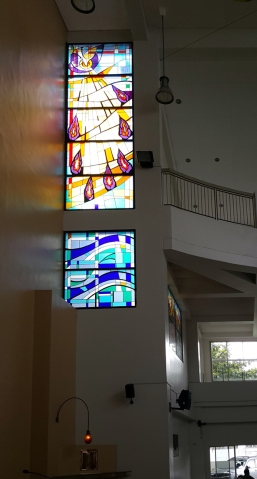 Altar Stained Glass, The Descent of the Holy Spirit

Throughout the church, there are several stained glass designs that feature the Pentecost. Designed by Arch. Pinpin and Ronald Kraut of the famous Kraut Art Glass company, the two have previously collaborated with a stained glass piece at the Church of the Gesù, in the Ateneo de Manila campus. At the front façade of the church is a roundel of the Holy Spirit descending of the Blessed Virgin Mary and the disciples of Christ, which is also repeated on a six-paneled rectangular piece at the right transept. The images of the Virgin and twelve apostles are rendered in a style that was inspired by the medieval Romanesque iconic painting. While the stained glass window at the right side of the nave is a more modernist approach to the image of the Holy Spirit and the tongues of fire.

The Kraut Art Glass started in 1911, when Matthias Kraut arrived in the Philippines from Germany. Starting with a business of house painting, Kraut would open his stained glass business in Quiapo, in 1912. Soon the Kraut Glass Art company would be the leading stained glass company in the Philippines, creating masterpieces for churches, homes and business. Some of the major pieces created by the Kraut Glass Art company are the Archway of the Philippine Pavilion in the 1917 St. Louis Exposition, with Galo Ocampo for the 1954 Santo Domingo Church in Quezon City and the 1958 Manila Metropolitan Cathedral-Basilica in Manila, and the Santo Niño Basilica in Cebu. Now-a-days, the business is managed by Matthias’ grandchildren:  Robert Kraut Jr., Ronald Kraut, and and Rochelle Kraut-Barrinaga

Lastly, there are the 14 Stations of the Cross or Via Crusis, which adorn the walls of the church. The carved wood panels represent the Passion of Jesus Christ, which start with his celebration of the Last Supper during Passover with the apostles, and the last panel features the Resurrection of Christ three days after his death by crucifixion. Although the artist has never been identified, these simple modernist styled pieces add to the wealth of art found within the Our Lady of the Pentecost Parish.

Our Lady of the Pentecost Parish is truly a secret treasure of art and design, as its location in a private residential subdivision doesn’t give it much exposure. In fact, I would have not discovered the church, has we not have attended the First Communion of our daughter, in 2010. During that time, I was not able to appreciate the wealth of creativity that was put together to express the people’s faith and belief. Now-a-days, the Our Lady of the Pentecost Parish stands as a contemporary masterpiece of art and design. 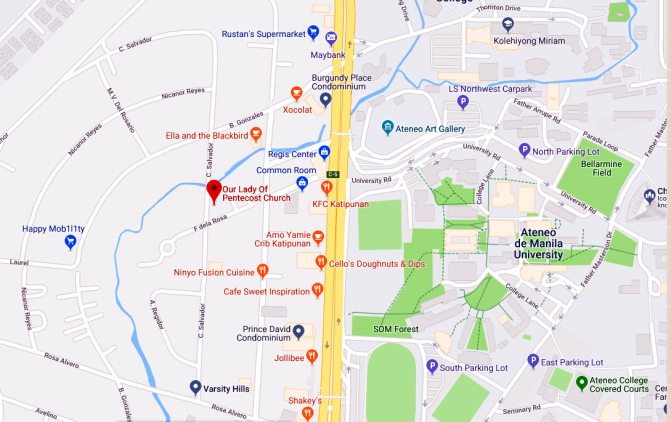