The SVD’s (Societas Verbi Divini) Christ the King Mission Seminary, along the E. Rodriguez Sr. Boulevard, was built in in 1933, and has been crucial in the establishment of other Catholic institutions in districts of Cubao, New Manila, and Kamuning. Among these religious and educational institutions that the SVD has directly or indirectly help found are the Sacred Heart of Jesus Parish Shrine of Kamuning on Scout Ybardolaza Street (est. 1941), the Convent of the Holy Spirit on Poinsettia Street (est. 1945), the Immaculate Conception Cathedral of Cubao between Lantana and Vancouver streets (est. 1950), the Immaculate Conception Parochial School along Lantana Street, the St. Joseph Convent of Perpetual Adoration on Doña Hemady Avenue and 11th Street (est. 1965), and the Holy Spirit School High School along Ilang-Ilang Street (est. 1966).

Inside the Christ the King Mission Seminary is mainly comprised of the Buttenbruch and Finnemann halls, however other structures in the compound are the Villa Christo Rey for retired SDV priests, the Sementeryo ng Mga Relihiyoso for SVD priests who have passed away, the SVD Mission Seminary Foundation building, and the Diocesan Shrine of Jesus, The Divine Word; which have all be constructed during the mid-20th Century. It would take almost five decades before any new major structure would be constructed within the Christ the King Mission Seminary compound, with the opening of the Garden of the Divine Word in 2008.

The Garden of the Divine Word is a columbary (also called a columbarium or cinerarium), in which niches are placed in the walls for the ashes of the departed faithful are buried. The founding of the Garden of Divine Word was part of a growing demand for new interment spaces within Metro Manila, because burial plots in private cemeteries were too expensive and out of the way for regular visits, while public cemeteries were over crowed and lacked security to protect the graves. So in the late 1990s, many churches around the metropolis started constructing their own columbaries in their properties, to fulfill the needs of the families of the departed.

The Garden of Divine Word was built on the hillside slopes of the Christ the King Mission Seminary compound, which was too uneven to build a normal building foundation. Before the columbary was constructed, the area was a large garden that fronted the century old SVD clergymen’s cemetery, the Sementeryo ng Mga Relihiyoso.

2008 Garden of the Divine Word, Stairway and Koi Pond

2008 Garden of the Divine Word, Stairway and Koi Pond

The sprawling uneven terrain has the Garden of Divine Word buildings are scattered all around the complex. The three-storied main building contains the offices, small chapels, and niches. From the main building, a series of multi-leveled stairways lead to the garden area. A Koi pond (Cyprinus rubrofuscus) is strategically placed at the bottoms of the stairway, symbolizing good fortune, as a prayer for the souls of the departed to enter the gates of heaven.

STOTC 1: Jesus is brought before Pontius Pilate, while Peter denied Him

STOTC 2: Jesus is forced to wear the Crown of Thorns, and bear the Cross

STOTC III: Jesus falls on the path to Golgotha

STOTC V: Jesus is aided by Simon of Cyrene

Upon reaching the garden, visitors are greeted by the images of the fourteen Stations of the Cross, or Via Crusis, all laser etched onto stainless steels, and mounted on stone walls. This allows the faithful to enjoy the peace and beauty of the garden while enacting the Lenten Tradition of the Seven Church Pilgrimage by reciting the Passion and Death of Jesus Christ.

2008 Garden of the Divine Word, Grotto of Our Lady of Annunciation

2008 Garden of the Divine Word, Grotto of Our Lady of Annunciation

Our Lady of Annunciation

At the center of the gardens is the Grotto of Our Lady of Annunciation, an amphitheater styled outdoor chapel. The rows of concrete benches are separated from the altar by a circular pond, or moat; which they call the lagoon. The altar is raised two levels above the ground, at approximately 1.5 meters, while small waterfalls cascade into the lagoon. And above the altar is a statue of the Virgin Mary overlooking the entire garden. 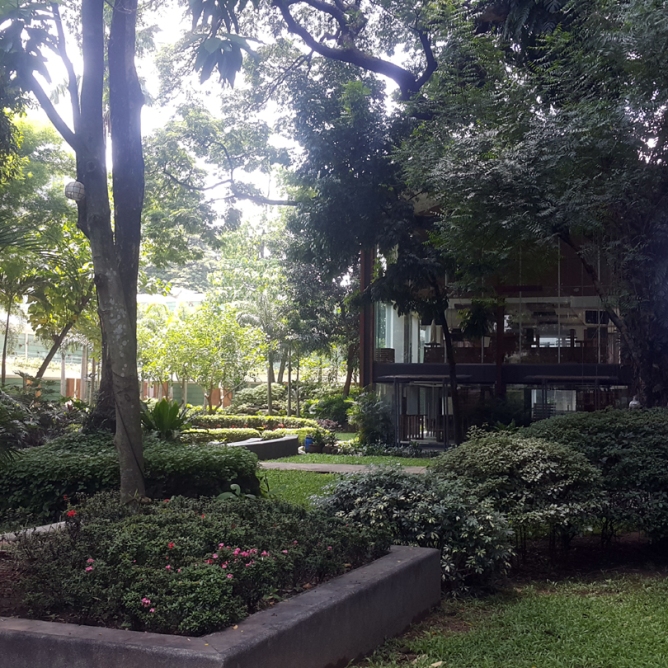 Behind the Grotto of Our Lady of Annunciation are the three-storied main chapels, with glass walls for the visitors to enjoy the serene vista, despite their grief. In front of the main chapel is a large narra tree (Pterocarpus indicus), which the residents and staff of the Christ the King Mission Seminary believe to be more than a hundred years old. At the back and side of the chapel is the second two-storied wing of Garden of Divine Word, with more niches available.

The Garden of Divine Word was designed by the landscape architecture company, CRÉARIS, with a clear vision of creating a glimpse of the paradise that is the Garden of Eden, where the departed will finally come to rest in the arms of their creator.