The Chapel of St. Joseph’s College of Quezon City (SJCQC) is the oldest standing edifice along E. Rodriguez Sr. Boulevard, in Quezon City. Constructed in 1932, shortly after the Dutch Franciscan Sororum Franscicalium Immaculada Conceptione De Mater Dei (Sisters of the Immaculate Conception, SFIC) settled in the municipality of San Juan del Monte, after their move from the province of Nueva Vizcaya, in the same year. The chapel was part of the formerly named all-girls St. Joseph’s Academy and Convent.

To get to the SJCQC Chapel, visitors have to enter the Administration Building, which was built in 1934. In the administration building there is a stairway that bridges it to the 2nd floor chapel. On the stair walls are two niches with icon brought by the Dutch SFIC sisters during the early years of the St. Joseph’s College, as well as some new additional religious figurines for the latter years of the school’s history. In on niche is the image of Saint Rose of Lima, TOSD (born Isabel Flores de Olivia, 1586-1617), co-patron saint of the Philippines, with some contemporary angel figurines. At the opposite niche is an art deco styled Sacré Coeur (sacred Heart of Jesus), reminisce of the style of Paul Jean-Baptiste Gasq (1860-1944). Along with the statue of Jesus are contemporary sculptures of Saint Pio of Pietrelcina (born Francesco Forgione, 1887-1968) and an angel. At the top of the stairway is a jade bénetier (holy water stoup).

Upon reaching the doorway of the chapel, visitors are greeted by a modernist styled Christ Risen or Easter Crucifix, hung above the portal. The image of the Triumphant or Risen Christ on the cross as a subject for artists in sculpture is a modern phenomenon, with only the exception of the 742 Volto Santo di Lucca in the Cattedrale di San Martino in Italy. However, this theme is still very rare to come by, as the only person to experiment with this theme in the Philippines was National Artist, Napoleon Abueva, in the 1950s. What was more popular during the 1920s to 1940s was the image of Cristo Rey (Christ the King), as seen in the monumental pieces of Paul Maximilien Landowski (1875-1961) and Gheorghe Leonida’s (1892–1942) 1931 Cristo Redentor in Brazil, Urbici Manonelles Soler’s (1890–1953) 1939 piece in the United States of America, and Nicholas Mariscal 1944 work in Mexico. 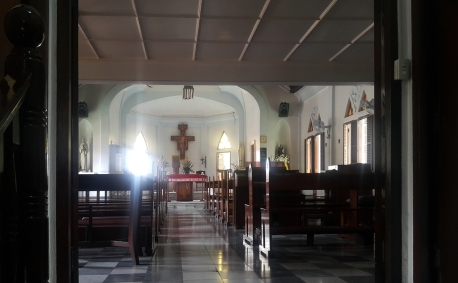 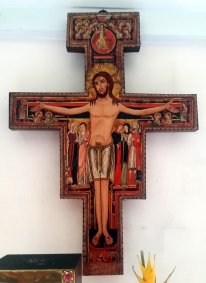 Entering the chapel, visitors notice a replica of the San Damiano Cross hanging above the altar. The original cross was a 12th century Byzantine icon that hung in the Chiesa di San Damiano, where St. Francis of Assisi (1182-1226) was given the mission by God to heal the Church, in 1205. The rood cross of San Damiano portrays the passion of Jesus Christ, with the angels and saints in witness, while the hand of God is illustrated above and guiding Jesus. Above the head of Jesus is the abbreviated Latin phrase:  “IHS Nazare Rex Ivd æorv” (short for Iesus Nazarenus Rex Iudaeorum), or “Jesus of Nazareth, King of the Jews.” The San Damiano church was also the birth place of the Order of Saint Clare, in 1212. However when the monastery of the Poor Clares was moved to the Basilica di Santa Chiara, in 1257, the San Daminao Cross was also transferred to the new church.

At the sides of the altar are two niches, in which two art deco sculptures are place. The two icons were created by the Dutch artist, Gérard Linssen, in the 1910s. At the left is the Blessed Virgin Mary holding the Christ Child, as the incarnation of Mater Amabilis (Sweet Mother or Mother Most Amiable). And at the right niche is Saint Joseph, completing the Sagrada Familia or Holy Family. In two more niches at the entrance to the chancel, with Saint Francis of Assisi at the left and Saint Clare of Assisi (1194-1253) at the right. The figurine of Saint Clare was not the original sculpture at the niche, which was that of the Sacred Heart of Mary.

Gérard Francis Hubert Linssen (1858-1921) is a sculptor and craftsman from Venlo, Netherlands. Linssen trained in sculpting, modeling and fabrication from the Schmitt-Heckler company on Cologne, Germany. Mastering his craft, Linssen returned to Venlo, where he opened his polychrome plasterboard factory in the Panhuisstraat district of Venlo, in 1893. His factory would specialize in religious iconography, with many pieces created in the Ant Nouveau and Art Deco styles, which were sweeping Europe from the late 19th to early 20th century. Linssen’s success led to other factories opening in Venlo, and created one of the key export industries of the city. With so much competition, other companies were plagiarizing Linssen’s designs. Hence Linssen began to etch the mark of “Namaak Verboden” at the back of each sculpture (translates as “Fake Forbidden”), which was a warning to all those who coveted to steal his designs. Alongside the copyright notice, he would also etch the serial number of each design, as well as the initials of G.L.V., or GérardLinssen from Venlo. 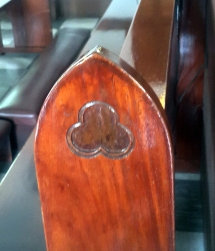 The whole chapel both ventilated and illuminated by simple yellow stained glass windows. Above the windows and on the pews are the three leafed symbol, called the trefoil. This medieval motif symbolizes the Holy Trinity of God the Father, Jesus and the Holy Spirit.

The Prestól or altar table is a new addition to the chapel. The simple design is decorated with an abstracted carving of the heads of wheat and grapes forming a cup, or chalice; which represents the body and blood of Christ in the Sacrament of the Eucharist.

During the height of World War II (1938-1945) in the Philippines, the Japanese had invaded the country and were occupying many of the homes and establishments in Hacienda Magdalena, including the Saint Joseph’s Academy. Before the SFIC sisters were detained and transferred to the internment camp in Los Baños, Laguna; they were preparing for the centennial celebration of the founding of the Sororum Franscicalium Immaculada Conceptione De Mater Dei in 1844, by Mother Theresia Van Miert (born Jacoba Petronella van Miert, 1822-1891) and her uncle, Pastor Bernardinus Van Miert. In 1944, the SFIC sisters commissioned the modernists Galo Ocampo and Carlos “Botong” Francisco to paint a series of murals on the chancel and choir loft walls, as a part of their festivities. These murals would depict episodes in the founding of the Franciscan order, as well as the SFIC in the Philippines. Unfortunately, the murals were painted over in the 1970s by a parish priest who could not understand the significance of those now-fading artworks.

Carlos “Botong” Villaluz Francisco (1914-1969) is noted as the greatest painter to hail from the artists’ town of Angono, Rizal province. Francisco graduated from the University of the Philippines (U.P.) School of Fine Arts, under Fernando Amorsolo. After graduation, Francisco created illustrations for the Tribune and La Vanguardia, while he also did commissioned sets and murals with the emerging modernists, Victorio Edades and Fermin Sanchez. Their works were used in productions held at the Manila Grand Opera House and the Clover Theater. Francisco’s distinct style of painting set him aside from the classicists of the period, and he would later be part of the first wave of the Philippine Modernist Movement, that would change the face of art. After World War II (1938-1945), Francis began teaching at the University of Santo Tomas. During that period, he started collaborating with the director, Manuel Conde Urbano(1915-1985, National Artist for Film), in developing the script for the film Genghis Khan (1950), and two uncompleted projects: Putol na Kampilan (Broken Sword), and Tatlong Labuyo (Three Wild Roosters). Francisco was also the costume designer for Conde’s films, such asPrinsipe Teñoso (1941), Ibong Adarna (1941), Siete Infantes de Lara (1950, Seven Princes of Lara), and the Juan Tamad series (1947, 1959, 1960, and 1963; Lazy John). Francisco’s unique compositions and bright color palettes won him many awards, but his distinction in the art scene was by the many murals that he executed in many buildings such as Bulwagang Katipunan of the Manila City Hall and the Stations of the Cross for Far Eastern University. In 1964, Francisco was given the Patnubay ng Sining at Kalinangan Award from the City of Manila, and in 1973, he was honored as a National Artist in Painting.

Galo B. Ocampo (1913-1985) is a painter, sculptor, scenographer, writer, educator, columnist, museum curator, and cultural-activist from the province of Pampanga. Ocampo took his formal art training at the University of the Philippines (U.P.), and he would be later study heraldry and become a member of the International Institute of Genealogy and Heraldry in Madrid. Later on, Ocampo would go to Rome, and study Liturgical Art at the Instituto Internasionale de Arte Liturgica. As a painter, Ocampo is known as part of the triumvirate of the first modernists in the 1930s with Victorio Edades (1895 -1985)and Carlos “Botong” Francisco (1914-1969). During World War II (1938-1945), Ocampo was a captain in the guerrilla movement against the Japanese, and would lead in intelligence gathering. As a cover, Ocampo would create stage backdrops for the actor/director Allan Fernando Reyes Poe Sr. (1916-1951) and his Associated Artists group. During the term of Pres. Diosdado Macapagal (1961-1965), Ocampo served as curator of the Presidential Museum of Malacañang, later on as director of the National Museum, and served as a Secretary of the Philippine Heraldry Committee which helped to design various seals of the different cities, municipalities, and provinces around the country. In the 1960s, Ocampo started teaching at the University of Santo Tomas (UST) and at the Far Eastern University (FEU), where he became head of the Department of Fine Arts in 1971. Although the symbolical painting “Brown Madonna” (1938) was a radical piece in its time, Ocampo moved on to more surreal imagery, with his flagellant themed collection embodied in “Ecce Homo” (Behold the Man), echoed his nightmares of the war. Occampo also worked with the American anthropologist, Robert Bradford Fox (1918–1985), in his work on the Tabon Caves in Palawan; which would be the inspiration of Ocampo’s first solo exhibition in 1973. Although Ocampo received the Patnubay ng Sining at Kalinangan Award from the City of Manila in 1964 and posthumously awarded the Order of Lakandula with the rank of Marangal na Pinuno in 2015, he was never honored as a National Artist, due to questions about his possible dual Filipino-American citizenship. 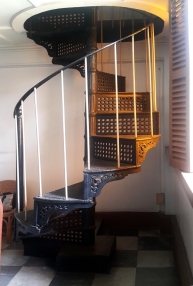 Despite the loss of the murals, the St. Joseph’s College Chapel is still the spiritual heart of the school, as well as the SFIC in Quezon City.

My special thanks to Sister Ancilla S. Cabula, SFIC, SJCQC IMC Coordinator and Archives Team Chairperson, for showing me around the St. Joseph’s College of Quezon City and allowing me to document the school.