Stretching 3.2 kilometers from the E. Rodriguez Sr. Boulevard corner to Sergeant Emilio Rivera Avenue, in Quezon City, Banawe Street is called the Autoparts Capital of the Philippines for the many car part stores and repair shops along the road. Like several streets in the area, the thoroughfare was named after mountain, in this case the Banawe Rice Terraces (also Banaue), of the Cordillera mountain range, in northern Luzon.

1957 Children’s Medical Center of the Philippines 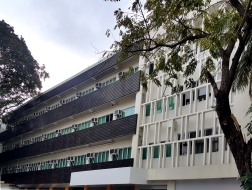 From E. Rodriguez Sr. Boulevard, the first major landmark on Banawe is the Fe Del Mundo Medical Center, which was established in 1957. The hospital is named after its founder, Dr. Fé Primitiva del Mundo y Villanueva (1909-2011), who is the first woman pediatrician to be admitted to Harvard Medical School (1936), whose pioneering research is credited to the invention of the first incubator and jaundice-treatment machine, the first woman to be named National Scientist of the Philippines (1980). Affected by the deaths of her siblings at infancy and early childhood, Fé del Mundo first took her medical studies at the University of the Philippines, then upon graduating with honors, continued her medical education at the University of Chicago, and finally a master’s degree in bacteriology at Harvard University, Cambridge, USA. Dr. del Mundo returned to the Philippines in 1941, to put up hospice with the Red Cross at the Japanese World War II internment camp at the University of Santo Tomas campus, where she gained the moniker as “The Angel of Santo Tomas.” After the war, Dr. del Mundo was asked to work for a government children’s clinic; but frustrated by the bureaucracy, she put up her own private clinic. Later, Dr. del Mundo would sell her home to build the Children’s Medical Center (later renamed as the Fe del Mundo Medical center) in 1957, the first pediatric hospital in the Philippines, with additional funding from the GSIS (Government Service Insurance System). Dr. del Mundo and her family lived on the second floor of the hospital, as she would see to the care of the patients day and night, until her death in 2011. For her years of service, Dr. del Mundo was honored with the 1966 Elizabeth Blackwell Award for “Outstanding Service to Mankind” by the Hobart and William Smith Colleges, the 1977“Outstanding Pediatrician and Humanitarian” by the International Pediatric Association,the 1977 Ramon Magsaysay Award for “Outstanding Public Service,” and the 2010 Presidential Order of Lakandula with the rank of Bayani by President Gloria Macapagal-Arroyo.

One interesting feature of the Fe Del Mundo Medical Center is the concrete map of the Philippines, in the middle of a rotunda of the hospital’s rear driveway and parking lot. The map that is “floating” in the middle of a pool of water represents the influence of Dr. del Mundo throughout the country, in the field of pediatrics.

At the corner of Cadiz and Banawe streets is the Population Center Foundation (PCF) building, which was established in 1973. When the organization was reorganized and renamed as the Philippine Center for Population and Development (PCPD) in 1991, they left the building for a venue in Taguig City. Presently the building is referred to as the Medical Arts Building of the Fe Del Mundo Medical Center, with the FDM Training Center opening in 2011. 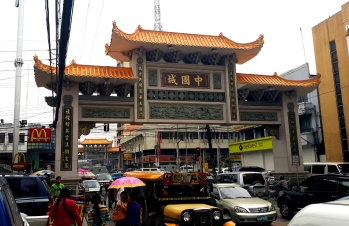 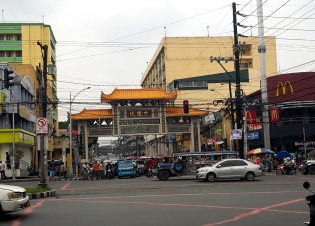 At the intersection of Pres. Manuel Quezon Avenue and Banawe Street are two Chinese páifāng (arches that are also called pailou) that represent the Banawe area is the “Chinatown” of Quezon City. The general vicinity of Banawe and its side streets were declared by the city council as a “Chinatown” in 2005, and the páifāng were erected at the north and south entry points of Banawe Street, coming from Quezon Avenue, in 2013. Serving as the gateways to these communities, the Chinatown páifāng was erected in 2013, as a project of the FFCCCII (Federation of Filipino-Chinese Chamber of Commerce and Industry, Inc.). Aside from the automatic businesses along Banawe Street, there are many noted restaurants along the road, serving authentic Chinese cuisine.

Around 1.1 kilometers northbound from the Fe del Mundo Medical Center is the government Philippine Orthopedic Center, which was erected in 1963. The was established in 1945 as the Mandaluyong Emergency Hospital, as part of the National Center for Mental Health (then called Mandaluyong Mental Hospital) compound. The new hospital was set up to deal with the needs of civilian casualties of World War II, especially the Battle of Manila (February 3 to March 3, 1945), which saw most of the city flattened by American and Japanese bombing and a documented over one hundred thousand civilians killed. When Dr. Jose Valmonte de los Santos Sr. (1898-2000) took over the administration of the hospital in 1947, it was immediately renamed as the National Orthopedic Hospital. With the growing populations and rising requirements of both hospitals, the National Orthopedic Hospital was moved to its present Quezon City site in 1963, and was later christened as the National Orthopedic Hospital-Rehabilitation Medical Center (NOH-RMC), then renamed as the Philippine Orthopedic Center in 1989.

Across Banawe Street, from the Philippine Orthopedic Center, is the Philippine Rehabilitation Institute Foundation, Inc. Established in 1974 as a Bachelor of Science in Physical Therapy course, by the Institute of Physical Therapy and the College of Rehabilitation Sciences of the University of Santo Tomas (UST). In 1993, the foundation became an autonomous unit from the UST. 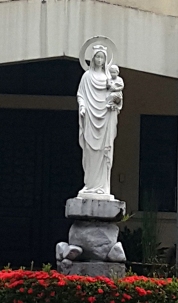 Missionary Sisters of the Immaculate Heart of Mary

At the corner of Banawe and Calamba streets and beside the Philippine Orthopedic Center, the Queen of Peace Convent was named after the Notre Dame de Paix (Our Lady of Peace), a 1500s incarnation of the Blessed Virgin Mary. The convent is administered by Metro Manila home for the Missionary Sisters of the Immaculate Heart of Mary (ICM), which was established in 1897 as the Missionary Canonesses of St. Augustine by the Belgian Mother Marie Louise De Meester (1857-1928). Sr. Meester and her novices arrived in the Philippines in 1910, and started their ministry in the province of Ilocos Sur. In 1915, the ICM sisters moved to Manila to be closer to the supply and travel routes. 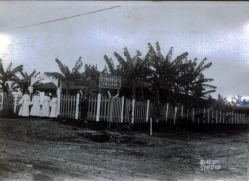 Moving further north, one crosses the intersection of Del Monte Avenue and Banawe Street. Near the intersection is the Ace Water Spa, a hydrotherapy center that was opened in 2005. The center offers different types of hydro-massage, herbal pools, sauna baths, and an Olympic sized pool where the Bert Lozada Swim School trains, which was founded by the former National Swimming Team coach, Remberto “Bert” C. Lozada (1941-2009). 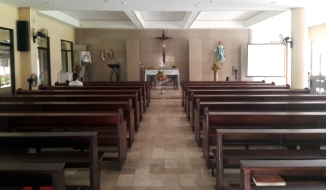 Almost 1.3 kilometers north of the Queen of Peace Convent is the Manresa Retreat House, erected by the Jesuit order in 1954. The recollection house was named after the northern Spanish town of Manresa, where the founder of the Society of Jesus (Jesuits), Saint Ignatius of Loyola (born Íñigo López de Loyola, 1491-1556), took solitude in a nearby cave, which helped him write his book on meditations and prayers “Exercitia spiritualia” (Spiritual Exercises), which was published in 1548. Hence the Manresa Retreat House serves as a place to take the time off to reflect on one’s life, just as Saint Ignatius had almost 500 years ago.

Roughly 400 meters north of the Manresa Retreat House is the intersection of end of Banawe Street and Sergeant Emilio Rivera Avenue. Formerly named after the highlands of Tagaytay, the road may have been rechristened after the army soldier, Emilio Castro-Rivera, who received the Purple Heart for his service during the Korean War (1950-1953). At the northern corner of Banawe and Sgt. Rivera is the Wow Toy Museum, a private exhibition of the toy collection of businessman, Jimmy Gaw Chua Madarang, which he opened to the public in 2011.

Despite the chaos of Banawe Street’s hawkers, vendors and auto-services spilling on to the streets and causing traffic, the road has many stories to tell with its religious and medical heritage sites and recreational centers. The challenge is to peer beyond the cacophonic businesses, and see the true wealth of Banawe Street.

4 thoughts on “Quezon City: The Histories of Banawe Street Landmarks”